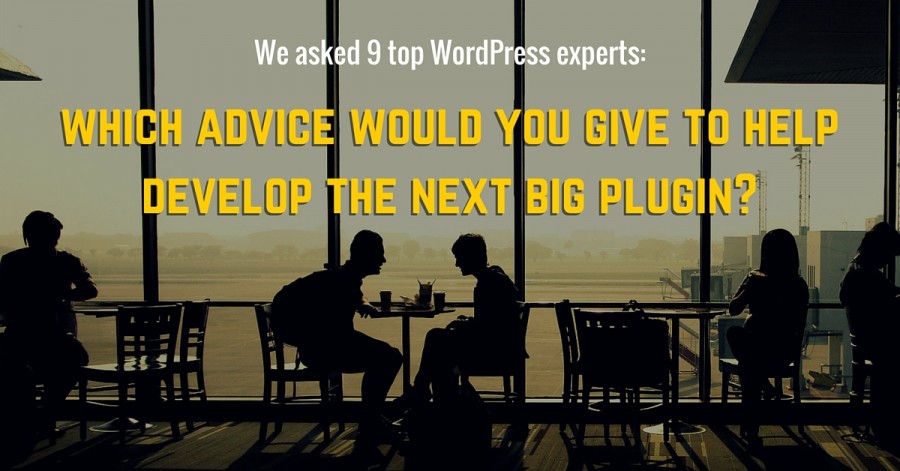 There are over 44K plugins on the WordPress repository. Next week that number will probably grow to 45K.

If you’re a plugin developer, how are you planning to reach the top 100 most downloaded plugins that gets hundreds of thousands of downloads? To reach this goal, building a kick-ass plugin just might not be enough.

To help you learn from others’ experience, we’ve gone and asked this question to the top WordPress developers & experts. This is the third part of our plugin development series, and you might want to check out the CaptainForm in-depth interview we did, as well as the 17 ways to get plugin ideas.

What is the one advice you would give WP developers to help them develop the next big plugin, the one most needed by our community?

We got advice from some truly WP giants:

In this expert roundup we wanted to get the perspective of two types of experts: developers of highly successful plugins, as well as WordPress blog editors. WP blog editors, much like plugin developers, need to keep updated with the latest trends, in order to make sure the plugins and WordPress related services they write about are of interest to their readers.

Here’s the advice we got to the question asking one advice for WP developers.

According to Vova Feldman, CEO of Freemius, Users’ attention and patience span is getting shorter and shorter, especially when they’re “on the internet”. Everybody knows that. Looking at it in the realm of WordPress plugins – your new users expect something to happen right after they install the plugin. If your on-boarding process requires too much effort & time from the user, you are likely to lose that user forever.

To avoid that, try to strictly hold up to the following standards:

1. Your plugin should be easy to install, easy to set up, and easy to use. A good UX will leave the user satisfied rather than overwhelmed and confused. And in case you feel like you were not very successful in simplifying the user experience do not be afraid to use some kind of user on-boarding wizard or even a simple welcome screen that explains where the plugin settings can be found and guides them through the setup.

3. Even though the majority of users want the plugin to “just work” out-of-the-box, don’t forget to include relevant information such as a link to the support area for your plugin, your preferred contact method, a link to the knowledge-base or FAQ section, as well as a link to an easy way to upgrade the plugin 🙂

Problems with support often arise because of under-staffing issues. When you are creating a plugin, you must think of its scope. A smaller plugin will usually require less customer support.

Roy Ho, one of 4 people mentioned on WordPress.org as responsible for WooCommerce, had this advice for aspiring WordPress developers:

“Be ready to provide excellent customer service as your product is only as good as the support behind it.”

3. Solve problems you yourself face

Necessity is the mother of invention, as the old saying goes. Mark Maunder, CEO of WordFence, the most popular security plugin (currently over 12M downloads), thinks this is applicable for plugin development.

“Listen to the community and solve a real problem that they have or provide a service they really need. A good starting point is to solve a problem that you personally have as a WordPress admin and publisher.”

With over 30M downloads, the creator of All in one SEO plugin Michael Torbert is someone whose advice should be taken into account. His advice focuses on avoiding development of a plugin that has already been created, and getting in touch with the local WordPress community.

“Innovate: find out an explicit need, or else create something people don’t know they need yet. Often, many just try to make better/different versions of pre-existing plugins. Those rarely succeed.

Instead, participate in your local community. Go to some WordCamps or your local WordPress Meetup and find out what people are doing and what would help them. Provide a solution to a problem.”

Karan Chopra, editor of JustWP, had a similar piece of advice:

“One advice I would give existing as well as newbie plugin developers would be to keep an eye for problems faced by WordPress users and make a plugin that address these issues. This is a simple idea that will not only help them come up with more useful plugins but also ones that are popular amongst users.

Rather than coming up with an idea yourself and convincing others to take it up, it’s simpler to let them address the issues they face and let them know of the solution you have developed. This increases acceptability of the plugin and users are more likely to recommend it to other users, making it more popular. An added bonus of looking for problems is that, if users are facing an issue with a plugin that you have developed, then you can address it in your next update, rather than someone else doing so and taking business away from you!”

5. Build for the non-technical user

Sam Sinton, of WPSquared, had this interesting perspective on the subject.

“Some of the very best and most popular WordPress plugins are the ones that were initially commissioned by those that are not developers themselves. I believe that this happens because non-developers are more likely to find their market by simply “scratching their own itch”. That is to say they have a problem, and they know how to fix it in a way that translates well to non technical WordPress users (even if they can’t actually code it themselves).

My advice to those looking to build a popular extension would be to get an idea of what current (non-technical) WordPress users would like to be able to do, that they can’t currently. Focussing primarily on areas that are not already covered by other well known premium plugin options. Though often simply improving the aesthetics of a plugins output can be the difference between a big seller, and a flop.

Finally I would suggest looking at areas that matter (increasing revenue, increasing optins, increasing traffic & building authority). It is often easier to sell a product that offers an immediate return (promised or actual) on investment.”

Francesco Canovi is the founder of Black Studio, the Italian developers of the popular plugin “Black Studio TinyMCE Widget“. He shared an original advice, that is more directed to advanced plugin developers.

“Think about other developers who may need to do customization: provide hooks and filters!”

Adam Connell, editor of WP Superstars, had this to say to aspiring developers.

“Creating a great plugin starts with identifying what challenges people are facing with WordPress, and figuring out how you can solve them with the use of a plugin.

But here’s the challenge:

There are an insane amount of plugins, so the chances are that there is already a plugin that overcomes most of the challenges people are facing.

Still more plugins will be released that aren’t always better than what has been done already.

So it comes down to this:

Forums and online communities can be a gold mine for feedback, and it’s that feedback that you need to shape the next big plugin.”

Alyona Galea, of WPmayor, had this to say:

“Contribute to the community especially in places like the Advanced WordPress group on Facebook, you will thus understand what people need and be able to come up with a great plugin idea.”

9. Get feedback from real people

“My advice would be to attend a couple of meetups and WordCamps, talk to people there and find out what their biggest pain is at the moment. Take their contact info, and when you are done developing, contact them for their opinion and feedback. They will likely also help you spread the word about it. 1, 2, 3 … Bingo.”

Here are the experts’ advice, including my own commentary and takeaways.

I hope you’ve found the recommendations our experts had to say interesting. I believe getting to know the hazards of the industry you’re getting into is well worth the effort.

As always, you are invited to contribute to the conversation and add your comments.