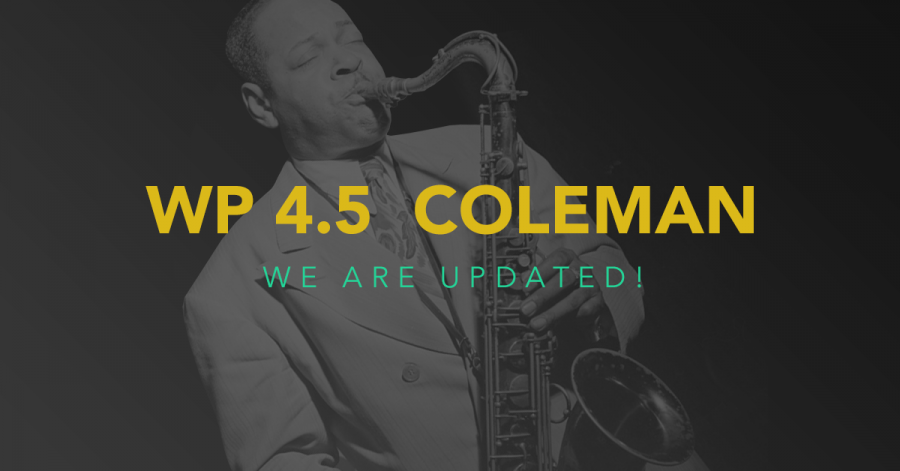 The new WordPress version (Coleman) is out, and with it come some important updates we wanted to fill you in with. Additionally, we also have some other product & news updates.

WordPress 4.5 introduces the ability to add a logo to a theme using the Customizer interface. This is a feature that had been already implemented in the various Pojo themes a while back, and now the rest of the WP community can enjoy the same feature.

Edit links while writing and other keyboard shortcuts

There’s a keyboard shortcut, Control+K in Windows and Command + K in Mac, that allows you to add a link to the text in the editor without using a mouse. In previous versions, using the shortcut opened a rather intrusive pop-up that interrupted the writing flow. Now the pop up has been changed to resemble a tooltip, and does not interfere with writing. You can easily create links without raising a finger from the keyboard.

Here are more keyboard shortcuts added to 4.5 that can help your writing flow:

These shortcuts already exist in other internet editors, and now WordPress is catching up.

Improve your ability to edit comments

Anyone who manages a website knows when you open the site up for user comments, comment spam never fails to show up. Comments require moderation, and it is sometimes a hassle to edit comments to fix grammar, remove links or change them to your editorial needs.

WordPress send the author of the post a mail for each received comment,  a mail that includes a link to approve the comment and possibly offer a reply.
Until now editing comments was a hassle, and in WP 4.5 an edit link was added, allowing you to edit the comment with one click.

This is excellent news for anyone running a blog or news site, because managing comments for these sort of sites sometime takes more time than writing the actual content. Jeff Chandler, founder of WPTavern, mentioned this fact in an AMA session held on ManageWP.

3 new icons have been added to the Customizer menu, allowing you to view a preview of the site on desktop, tablet and mobile. This is a highly useful feature for web designers.

Version 4.4 included an image optimization feature, so visitors with smaller screen would get images sized to fit their screen size. The feature vastly improved the speed & performance of WordPress sites, because smaller images load faster. Version 4.5 now adds another performance improvement for images, with an addition of up to 50% reduction in image size without any quality loss.

I am registered to who knows how many websites across the net. What can I do? I’m a geek. It’s hard to follow all the different user names used for each site. What generally happens is that I am required to ask the website to send me the user details to my email. Now, all this trouble is done. 4.5 Allows you to log into websites using your email instead of your username.

OK, now we are going to discuss the more technical changes that concern developers.

Up until this point, any change done in the customizer required pressing the “publish” button and waiting for the whole page to reload. This has changed with WP 4.5, where a selective refresh was added to the customizer. This change is very useful for anyone using the customizer.

The new version offers some external library updates. Two of these libraries, Backbone and Underscore, and worth mentioning, since they underwent significant changes. There were also updates to jQuery and jQuery Migrate.

Version 4.5 allows you to add JS code using inline scripts in an easier way, with an added function called: wp_add_inline_script().

WordPress 4.4 included Embed Templates as a new feature. This feature automatically shown a preview of a WordPress site in the editor, just by placing the site’s URL in the editor.
Now another functionality was added to the embed. Instead of automatically embedding an image preview, the site owner will have control over the type of embed shown in his site. The embed could be of an image, an image + content, just the URL, etc.

In the past, the page wp-admin/edit-tags.php was in charge of both the list of terms and the edit of them. Now a new file was added, dedicated to the list of terms, called wp-admin/term.php. This change brings working with tags closer to the process of working with posts, that also have a dedicated wp-admin/edit.php file and a separate wp-admin/post.php file.
This change influences the way certain functions call and register scripts.

We’ve release a new version for all of our themes with various updates and improvements, including full compatibility with version 4.5 of WordPress.
Among the updates:

We invite you to update your theme (right after creating a backup, of course).

We’ve been telling you for a long time that we’re working on the big thing in WordPress, and it’s going to be released soon.

These days we are putting the finishing touches on the upcoming release of the alpha version of Elementor – A revolutionary page builder that works 100% on the frontend of the website, with never before seen flexibility. Here’s a first glimpse of the new Elementor.