Blog
Home » Tutorials » How To Change Your WordPress Dashboard Language
Join us and enjoy the various powerful features!

One of the most significant upgrades in WordPress version 4.1 is the possibility to change the language of the site through the user interface. No code editing required in the wp-config like in the past.

There is no doubt that focusing on the multi language global market enables WordPress to grow worldwide so fast. As of today, WordPress is translated to 75 languages, and the translation to other languages continues.

Many users are interested in working with WordPress in different languages for various audiences, but as soon as you change the site language, the Dashboard does as well. What do you do when you want to keep the Dashboard in English, but display the site in French for the users?

Before we continue, we’ll go over the following terms:

Please note that we aren’t referring to a multi-lingual site, for that we have a detailed guide which you can read here. Only referring to changing the WordPress Dashboard language.

As of version 4.1, the option of changing the site’s language by changing it in the Settings has been added. Within seconds the system downloads the revelant language files and changes the translation and alignments according to the selected language.

So how do you change the only the Dashboard language?

It’s very important to understand, that as long as you’re not using any language plugin, the language displayed to the users in the site – will always be the one selected in the site settings. So, if you want to change the Dashboard language to another language, you need to download the following plugin: R3DF Dashboard Language Switcher, which allows you to change the Dashboard language to any language that exists in WordPress. (We previously recommended using WP Native Dashboard, but R3DF works better).

Take note that the plugin isn’t updated for the latest WordPress versions, but because it works efficiently, we all still work with it.

After installing and activating the plugin, go to > Settings > Dashboard Language 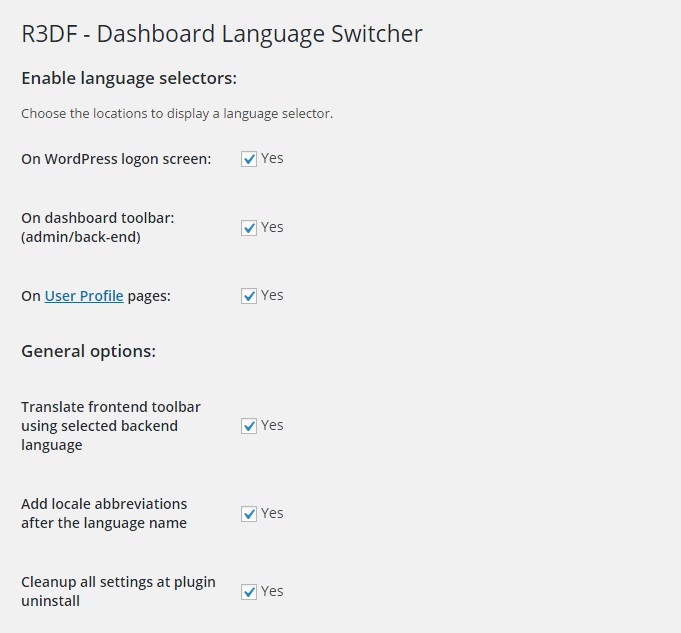 The first panel will show you a number of settings, you can mark all the settings and save.

In this page you can set the language switcher display in the login page, in the Dashboard Admin Bar and in the Admin Bar while viewing the site. You can also set the default language in each user’s personal profile.

Later you will see the list of languages installed on the system. In the past it was possible to download and install the languages using the plugin, but as mentioned, after upgrading to version 4.1, this interface is no longer active. 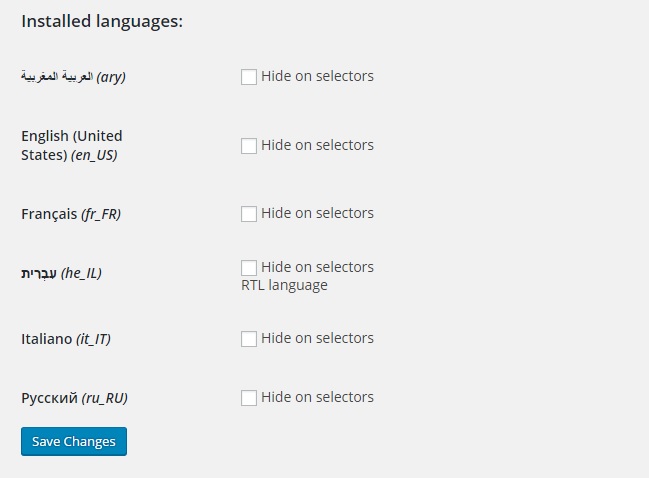 So how can you install a new language in the system?

Just go to > Settings> General > Site Language > Choose a new language and install. Then you will instantly see the new language you’ve installed appear in the language tab in the top bar.

Do not forget to set the Site Language again, so your users won’t suddenly receive a site with a different alignment.


View all posts by Ariel »